Does your skin suffer from inflammation causing redness and puffiness?  Would you like to know what helps to prevent scars, signs of aging and wrinkles?  It's common knowledge that vitamin E is good for your skin, but not many people could tell you exactly what this nutrient does.  To find out how exactly vitamin E works, and whether it’s good for my skin, we consulted the experts.

First off, what does vitamin E do? Well, according to Dr. Chris D’Adamo, an assistant professor at the University of Maryland School of Medicine, vitamin E is actually a family of eight different nutrients that are essential for human health. The compounds are all fat soluble, which means they need some sort of fat to be absorbed in our body. But in general, BSYI's (beautifulskinyourin.com) registered dietitian, Erin Ferguson tells us that vitamin E is a powerful antioxidant (which means it staves off free radicals that can cause chronic damage to our bodies, such as cancers and heart problems) and also helps fight inflammation. A new study recently dispelled the belief that vitamin E might help prevent dementia, as well — at least, not for older men.

Where can I find it?

Vitamin E occurs naturally in a ton of foods, so it’s pretty easy to find it through your normal diet. Ferguson noted that it’s found in avocados, almonds, sweet potatoes, sunflower seeds, whole grains, trout, olive oil, spinach, and more. It’s also added to a bunch of fortified cereals. But of course, you can also take it in supplement form and apply it topically through creams, which takes me to …

But is vitamin E actually good for our skin? 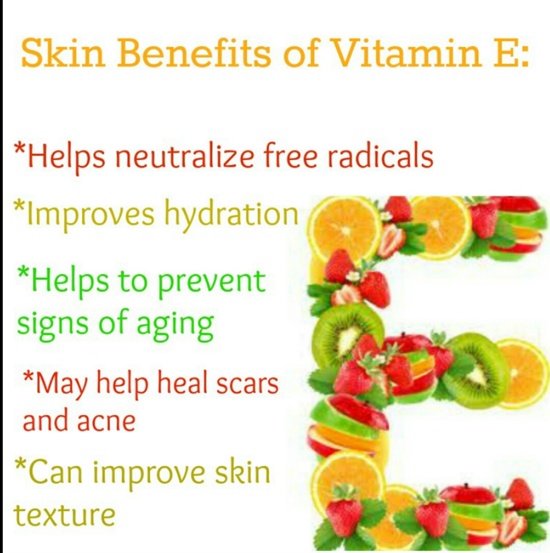 Luckily, it appears that my years of blindly using vitamin E products weren’t a waste, as the compound actually does have a beneficial effect on our skin. On the one hand, it’s an anti-inflammatory, which means it can help prevent redness, puffiness, and other general inflammation in our skin. But on the other, its antioxidant properties also mean that it can help prevent signs of aging and wrinkles, Ferguson explained. Dr. D’Adamo added that it can also help people get rid of scars.

So how much vitamin E do I need?

According to the Mayo Clinic, the recommended daily intake of vitamin E for adults is 15 milligrams. That amount is the same for pregnant women, but it’s a bit higher — 19 milligrams — for those who are breastfeeding. But Dr. D’Adamo tells BSYI that most people easily get enough vitamin E each day through their diets, so a deficiency of any sort is pretty rare. And even if they aren’t eating foods that naturally contain vitamin E, oils used for cooking generally contain a bunch of it anyway, so we still get it through our foods that way.

What happens if I don’t get enough of it, though?

As I said, vitamin E-deficiencies are incredibly rare among adults, but Ferguson tells us that if you do have a deficiency, you may experience loss of muscle coordination, impaired vision, and impaired speech. People who are at risk of deficiencies are those who have trouble absorbing fat (since it’s fat soluble), so if you have any sort of irritable bowel disease, you could potentially be at risk.