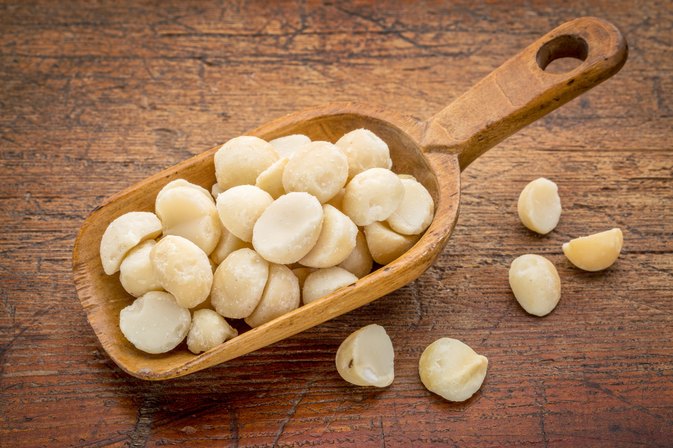 National Macadamia Nut Day is observed annually on September 4th. Macadamia nuts, with their rich, buttery taste, are known by many to be one of the most delectable of all nuts. Think of the creamy rich taste of a macadamia nut, plus consider its crunch with the Dried Cherry, Macadamia and White Chocolate Chip Cookies recipe listed below.

They originated in Australia and are named after physician and chemist, John Macadam, who encouraged the cultivation of the nuts in Australia. Macadamia nuts are delicious when eaten raw and also when used in baked goods, especially cookies! They are also known for their health benefits. Like many nuts, macadamias are a rich source of energy, high in dietary fiber, gluten-free, high in mono-unsaturated fat, an excellent source of minerals and contain many important B-complex vitamins.

• Macadamia nuts are native to Australia. They are named for John Macadam, a Scottish born physician and chemist who promoted the nuts cultivation in Australia.

• The Macadamia Nut is one of Australia’s few contributions to the world’s food plants, and this rich, buttery nut is considered by many to be the most delicious of all nuts.

• The Macadamia was introduced into Hawaii around 1881 and used as an ornamental. The first commercial orchards of macadamias in Hawaii were not planted until 1921.

• Most of the world’s macadamia nuts are grown on the island of Hawaii.

• Today Macadamias are cultivated in many areas, including Indonesia, Central America, South Africa, the West Indies, Mediterranean countries and California.

To make sure the cookies bake evenly, switch the position of the baking sheets (meaning move the cookies on the upper rack to the lower rack and vice versa) and rotate the sheets from front to back halfway through the baking time.

END_OF_DOCUMENT_TOKEN_TO_BE_REPLACED